How long do accident reports take to be completed?
Accident reports can take up to 2-5 days for the Officers to complete. Depending on the severity of the crash, could take longer. Please note: We do not send information to Insurance companies without a request. They can request a copy of the report by faxing, 419-435-9754 or by calling 419-435-8573.

Can anyone request a background check?
Yes. A criminal records check can be completed through Fostoria Police Departments arrest records only. For a more extensive criminal background check, you may need to contact your local Sheriffs’ office or BCI (Bureau of Criminal Investigation).

Alarm Permits can be picked up at the Police Department or open the link for the form here. Click here to read the ordinance language. Call 419-379-9999 for more information. 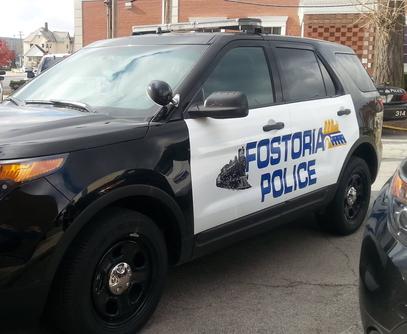 TO PROTECT AND TO SERVE

The Fostoria Police Department was organized in 1890, soon after Fostoria became a City. Prior to this a City Marshal, elected by the people, had been the peace officer. By 1911 the department included seven officers of which the Chief was one. At that time provisions were made for the temporary hiring of additional Patrolmen at $2.00 per day, “in case of riot or other emergencies.

George Strouse was the first Chief of Police, holding the position until his death in 1927, after which Captain Franklin P. Culp became Chief. He served until he retired on pension, after recovering from his severe wounds received during the Dillinger raid on the 1st National Bank on May 3rd, 1934. J. M. Walsh then became Chief.

The Fostoria Police Department was granted a charter by the Ohio State Fraternal Order of Police state lodge in 1935. Lodge #22 was named in honor of Franklin P. Culp. Lodge 22 has remained in active status to this day.